NOTE: Read below on how to support the creators!

You can support Josh Powlison by using the "Support this Kinetic Novel" button above, but that money'll just go to him! Thank anyone you want by choosing that and/or the other creatives' links in the credits below!

Are you new to Kinetic Novels?

What is a Kinetic Novel? It's like an old-school video game cutscene. Kinetic Novels show pictures of characters along with text.

First-person perspective. Most Kinetic Novels are told from the perspective of the Main Character (MC). You don't usually see the MC in a Kinetic Novel, because we're seeing the story through their eyes.

Some readers will imagine they're the MC as they read, although this isn't necessary- it's up to you and how you want to enjoy the story. I'll often read it as a narrative, not as if I'm actually the MC.

All narration is from the MC's perspective, and so may or may not be reliable.

Who's talking? The name at the top of the textbox shows who's currently talking. If the name is "Me", the Main Character is talking (since the story's told from the first person).

If no character name is shown at the top of the textbox, the text is the MC's narration or thoughts.

How do you play it? Click on the screen to go to the next line of text. If you're not sure if all text has been shown, you can wait for an arrow to show up at the bottom-right of the screen, signaling for you to continue.

If you click while text is still appearing, it'll display it all immediately, but you'll miss some of the animations and timing of the characters' tone.

In some cases, text may continue automatically, maybe to give the effect of a character being cut off in conversation or stopping themselves mid-thought.

What's the difference between a Kinetic Novel and a Visual Novel? Kinetic Novels play the same way every time, whereas Visual Novels allow you to make choices within the story. You read that correctly. The terminology is weird, but it's what it is.

Hover near the top of the screen to access the menu.

Click on the button in the top-right of the screen to toggle fullscreen.

Support these awesome people through their links! Just let them know it was 'cause you loved their work in Breakdown!

Uses the Showpony engine and Looper.

If any of these bugs are getting in the way of your experience, please let me know!

Wow. I absolutely did not expect the plot to go that way. I love how this game discusses such topics in such a compassionate, honest way. Thansk for sharing this game with the world.

Thank you so much for the feedback, it means a lot to me. And you're welcome!

Thank you so much, happy to hear! 😄

This made me almost cry. It's very touching. You are a good writer! 👍

Thank you so much, I'm really glad you enjoyed it! You've made my day. 😄

Thanks you so much, I'm glad you enjoyed it. 😄 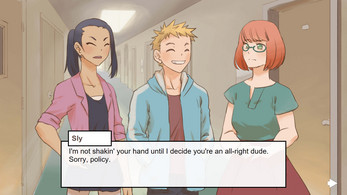 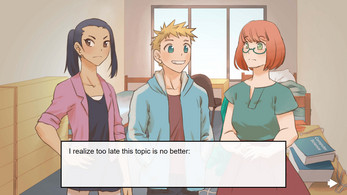 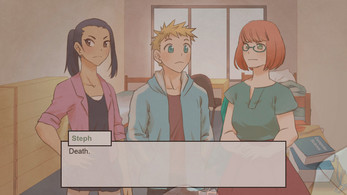